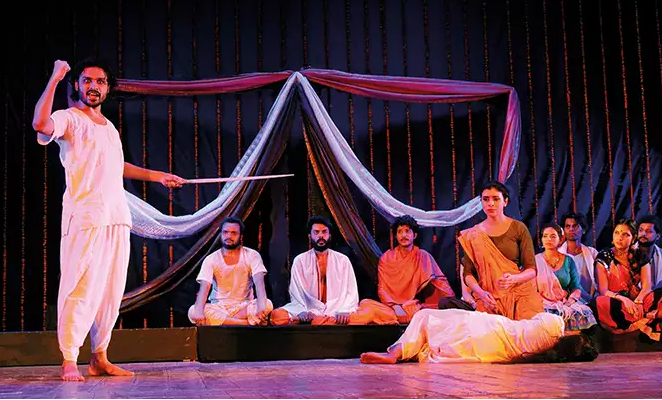 The convocation of the first batch of Varanasi centre of National School of Drama was marked by a six-day theatre festival held recently in the city. The outgoing students, presented plays which they had prepared throughout the year as part of their course. After the welcome address by Ramji Bali, Director of the Centre, the festival started with play Svapnavasavadattam. Written by ancient Indian poet Bhasa, the play was directed by KS Rajendran. Making a beautiful use of Indian music instruments and folk songs, under the music direction of Amod Bhatt, of Mohalla Assi fame, the play garnered a lot of appreciation from the audience.

Play Satya Harishchandra was staged on the following day of the festival Directed by Ram Dayal Sharma, the play was in nautanki style. Enactment by Karishma Desale as Taramati, Nikhil Thakur and Manish Dubey as Harishchandra, among others added to the play.

Among the series of classical plays, Bhagwat Ajjukam, directed by Ramji Bali was also staged. A comic play, that revolved around mistaken identity where the soul of a Buddhist scholar enters that of a courtesan and vice versa, led to a lot of hilarious moments, that was enjoyed by the audience.

The festival concluded with play Abhigyan Shakuntalam. Directed by Ramji Bali, the play revolved around the love story of Raja Dushyant and Shakuntala.